(Please note: Forsyth House, The Anchorage, The Old Bank House and The Retreat are private houses and NOT open to the public)

Turn left when you leave the Museum. 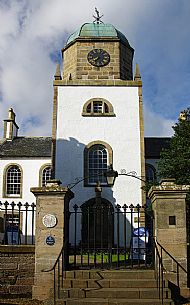 CROMARTY COURTHOUSE MUSEUM, Church Street.
Next door to Miller House is this excellent, award-winning Museum, run by a local Trust, celebrating the town’s history. It served variously as a sheriff court, town council meeting place and jail, between the 1770s and 1960s, and was restored and opened to the public in 1991. A mob staged a jailbreak here in 1843 to free a dairy-maid imprisoned for rioting. The unrest arose from the schism in the Church of Scotland known as The Disruption, in which Miller as Editor played a leading role.

FORSYTH HOUSE, High Street.
One of Cromarty’s finest Georgian villas, built in 1772 for leading merchant William Forsyth, on whom Miller wrote a memoir praising his enterprises. He launched a trading boom, including a thriving herring fishery. Miller first made his mark as a journalist writing his Letters on the Herring Fishery.

ICE HOUSE AND SALMON BOTHY, The Links / Braehead
These buildings lying either side of The Links car park are what remains of the herring and salmon fisheries. The shorefront once witnessed landings of huge shoals, a fish market, and salting and packing operations, as well as the summer storing of salmon in the ice house. 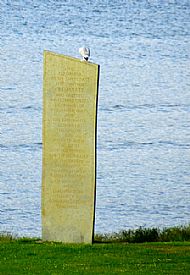 EMIGRATION STONE, The Links
Inscribed in situ by acclaimed letter-carver Richard Kindersley, this standing stone was erected as part of Miller’s Bicentenary Celebrations in 2002. It bears his words describing the departure of one emigration ship, the Cleopatra, and the names of more than 20 other ships which carried thousands of emigrants to Canada.

OLD BANK HOUSE, Bank Street.
Now a private dwelling, the building has the same frontage as the Commercial Bank premises where Miller toiled as an accountant between 1835-9, before his call to edit The Witness in Edinburgh.

Retrace your steps from here, back to the seafront to the north of the Museum, and explore the district known as Fishertown.

FISHERTOWN
A close community of herring fishers lived in these vennels. Many of the cottages still stand, although their turf roofs have long since been replaced by slate, the cobbled streets by tarmac. The fisherfolk were a distinct people, with their own customs, dialect, and mode of living, memorably observed by Miller, and captured in some very fine photographs about 1900, some of which can be seen in the Courthouse.

OLD GRAMMAR SCHOOL, SHORE STREET
Now a private residence, The Anchorage, this was the setting for some of Miller’s most vivid passages in his autobiography, My Schools and Schoolmasters. He described the multitude of vessels sailing into and out of the firth, the slaughter of pigs for salted pork nearby, fish-wives gorily gutting herring, and an annual cock-fight at the school.

Retracing your steps to the Museum, you can now undertake a tour to its right, of the eastern half of the town, and the scenes of Miller’s wild boyhood in the South Sutor Woods and shore, his courtship of his future wife, many legends, and later, his geological discoveries. 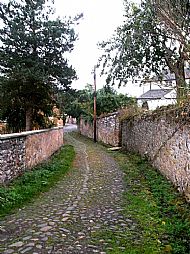 THE PAYE
First on your right after you leave the Birthplace Cottage, this was the medieval main road from the countryside (French pays) into Cromarty, through which Kings Robert the Bruce and James IV passed during royal “progresses” over the north of the country. Between The Paye and Lydia Garden in the Museum grounds is the remains of a tiny cottage which Hugh Miller built for a homeless aunt. 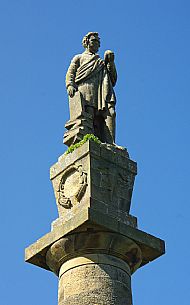 THE MONUMENT
At the top of a rise in The Paye, stands, on a slope to your right, Miller’s fine statue. It was erected, three years after his death, by public subscription in 1859. His dignity is somewhat undermined by seagulls’ constant use of his head as a perch! At the base, the inscription commemorates “his genius, and literary and scientific eminence.”  From this hilltop he looked in vain for the return of his father, who had perished in a shipwreck.

GAELIC CHAPEL
Behind the monument, the Chapel is now sadly in ruins, but plans are in progress to stabilise it and render it suitable for community use. Miller much praised its builder George Ross (1783) for erecting it, and creating much employment in the town, so that Gaels cleared from the glens could worship in their own language.

LADIES’ WALK
Off the Paye, opposite the monument, a public footpath with this name leads behind the houses in Church Street, the East Kirk, and on through the Cromarty Estate, which continues to be a favourite walk today, as it was for Hugh and Lydia Fraser when they were courting. Return if you will from there to Church Street. 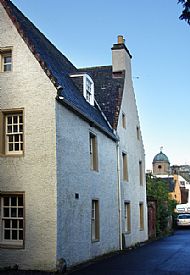 THE RETREAT, Church Street
Halfway between the Museum and the East Church, this private residence is another of Cromarty’s handsome Georgian villas, notable for what is probably one of Miller’s most horrific folk legends, in which a smuggler accidentally kills his own son in a brawl with customs officers (Scenes and Legends, Chapter XIV). An underground passage once ran under Church Street for the secret transport of smuggled goods like brandy and “hollands” (Dutch gin).

EAST CHURCH, Church Street
The former parish church, part of which dates back to Reformation times, has recently been magnificently restored at a cost of some £2.5 million. Its flagstone floors, pews, lofts and memorials speak eloquently of centuries of Scottish Presbyterian worship. The excellent interpretation panels within tell of a fraught history, in which lairds and ministers quarrelled fiercely, and the church frequently changed hands between Presbyterian and Episcopalian ministries.
Miller has been recorded as heeding the preachings of his friend and mentor, Rev Alexander Stewart, with special intensity from the family pews in the Poor Loft. This was shortly before the congregation departed en masse in The Disruption of 1843. Visitors today note how it still exudes an aura of prayer and contemplation. Remaining  consecrated, it continues to provide a few services every year. 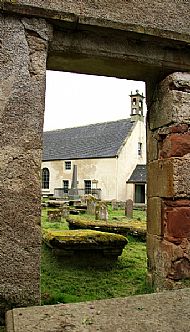 EAST CHURCH GRAVEYARD
Nestled picturesquely under the steep old “raised beach,” this kirkyard has a special significance in the Miller story, and Cromarty’s story as a whole. Many of his family are buried there, including his two uncles, James and Sandy, under tombstones in the far eastern corner, carved by Miller himself.  You can detect their identity, and those of other stones he carved, by his favourite motif of scalloped edges. One of his tales (Scenes and Legends, Chapter XXVIII) recounts boys getting their revenge on a brutal dominie. John Russel, had a weak spot, fear of ghosts. One of the boys sprang out from under one of the tombs, dressed all in white, and shrieking. Russel fled.