The David Attenborough of his day

Hugh Miller (1802-1856) has been acclaimed as "the supreme poet of geology" and called "the David Attenborough of his day." He gained such accolades not only as a pioneer of the science in its first heyday, but because he wrote about everything he saw and discovered in such gloriously luminous terms. He could lyrically evoke our planet's passage through deep time, while also describing his fossils with homely metaphors and comparisons with the familiar everyday. 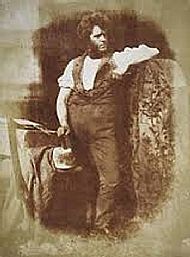 He achieved heroic status in his own time and ever since because he grew up in poverty, and achieved so much as a largely self-taught polymath, rising from jobbing stonemason to national newspaper editor and literary lion. His life brought triumphs in science and literature, in journalism, and for his evangelical Christian faith. But it was also beset with tragedy and conflict, and he would die by his own hand at the age of only 54.

Hugh Miller stood just short of 6ft tall, a man of most striking appearance with a great mass of flaming red hair and "sapphire" blue eyes (according to his wife, Lydia). He was proud of immense physical strength, an epic walker, cragsman, and sea diver, but suffered terribly all his life from "the stonemason's malady," silicosis, and this ultimately played a key part in his untimely death.  The picture to the left is a Calotype photograph of Hugh Miller as stonemason taken in 1843.

One of our key goals is to keep Miller's best writing in print. As is common with all writers, his work goes in and out of fashion, and the only reliable source for obtaining many of Miller's books is public libraries. His autobiography My Schools and Schoolmastersis undoubtedly the best account of his momentous boyhood and youth. Most recent biographies by George Rosie and Dr Michael A Taylor are accurate and very readable. The wonderful collection of folklore, Scenes and Legends of the North of Scotland, gathered mostly by the fireside in his birthplace Cottage, helped to launch his literary career.

Miller's classic geological work,The Old Red Sandstone, or New Walks in an Old Field, is shortly to be republished in new edition comprehensively introduced and annotated by Professor Ralph O'Connor and Dr Michael Taylor. His tour South of the Border, First Impressions of England and Its People, proved enduringly popular. Reprinting is anticipated of another most accessible travelogue, The Cruise of the Betsey, describing his epic voyages in the Inner Hebrides in the 1840s. 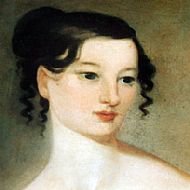 The story of Lydia Falconer Fraser is well-told in Elizabeth Sutherland's biography, Lydia, Wife of Hugh Miller of Cromarty. There is recounted in full, details of their family, her support for Hugh in securing posthumous publication of much of his work, her talents as a best-selling writer for children, and her own travails with ill-health.

The piscture to the right shows Lydia Miller, "the only surviving portrait of a young woman in love".

For a more comprehensive list of relevant publications please see the Bibliography.

Miller's work and reputation suffered a serious eclipse for most of the last century, when all his books fell out of, and stayed out of print. His geological interpretations of earth history were largely superseded by subsequent discoveries and research, and his faith-derived theories were soon proved unfounded with Darwin's publication of The Origin of Speciesthree years after his death.

However, from the closing years of the 20th Century, continuing on today and into the future, we have witnessed a very necessary, comprehensive and overdue re-evaluation of his worth. Publication in paperback in the 1990s of the autobiography and folk tales, edited by prominent Scottish author James Robertson, spurred on this revival. A series of academic conferences with international participation in 2002, 2008 and 2017 have confirmed his due place in palaeontology and the history of the science. A new Museum was opened at Miller House in Cromarty in 2004, telling the story far more clearly and comprehensively than was ever possible in the cramped Birthplace Cottage. Miller House will be refurbished anew in the next two years.

Most recently, we, The Friends, in partnership with the Scottish Geodiversity Forum, have launched a series of Hugh Miller writing competitions, which have brought forth outstanding new writings on the natural world. The first two competitions are embraced in a treasure chest of an anthology, Conversations in Stone, published earlier this year and reviewed in our magazine, Hugh's News, and on this site's Cabinet of Curiosities page. Other new initiatives are outlined in the MEET THE FRIENDS page.