The Friends of Hugh Miller is a Scottish registered charity, SCO37351

A kind of wizard 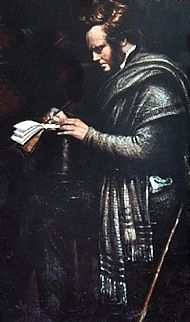 We would like to introduce you to a kind of ‘wizard’. He was tall, handsome, with a shock of red hair and large "mutton-chop" whiskers. He strode around our country around 180 years ago, at times covering 30 to 40 miles per day, in search of treasure. Fossilized, ancient treasure. This wizard was humble, determined, intelligent and entirely self-taught in his passion – geology. He studied hard to piece together the story of Scotland’s long history, becoming a visitor to deep time itself in his search for evidence. He worked tirelessly, gathering specimens of ancient fish, of reptiles, of long-extinct sea creatures, and pieced them together like a jigsaw – often literally. His finds would be scattered through layers of rock and distributed along shorelines and embankments, quarries and offshore islands, and he would somehow find each tiny piece – a scale here, a bone there, each fossil ghost a fragment of the story - and he would painstakingly reconstruct their past shapes and forms and puzzle over their ancient world. Then, he decided to tell his contemporaries all about his treasures. He began to write.

His name was Hugh Miller

His advice to us all:

MAKE A RIGHT USE OF YOUR EYES